The world of TaijiQuan changed in the 1980s with the opening up of mainland China.  Two barely known themes fundamental to the training began to emerge: ZhanZhuang, the standing qigong, and Chansigong, the technique of twining silk.  This book documents an old-timer's plunge into this new world.

The movement, so hard to initiate correctly, becomes perfectly easy once the correct internal connections are found. They are to be sought in a very delicate manner. The error lies in trying to move deliberately. One too easily does too much, too coarsely, and thereby misses the connections. As the arms moving further rightwards turn to go leftwards, there needs to be a kind of slipping into place, a soft and silky sensation along the torso on both sides. Interior linkings create a surface to travel on, a winding path to follow, and once the corner is turned, the way onwards is open.

Three chapters of the book examine in detail a video recording of Kinthissa's first solo lesson with Chen XiaoWang in 1995.  Frame by frame, inch by inch, touch by delicate touch, each movement the precise expression of a coordinated twining, the master communicates to the sensitive student the inner sense of the form in TaijiQuan.

To be guided through these movements is to be given a hint of mysteries that are not easily internalized or understood.  Eventually, however, internalize them we must.  Asked by a student about which muscles should be brought into play for a particular movement, Chen XiaoWang replied, "I give you flowing; which muscle use, which muscle not use, you must find."

One day he invited us to try stepping sideways in yun shou, 'Cloud Hands', without losing centre.  Each student in turn came forwards and stood ready to move.  Master Chen applied hands-on correction until he was satisfied with the stance - "Qi now flowing" - then he stepped back a couple of paces and said, "Now start movement, do not lose centre."

The instant when he saw that centre was lost, he would say, "Stop!"  Sometimes, he said "Stop!" before the student had even begun to move.  Banner had waved, but body had not followed.  Sometimes, he said "Stop!" at the moment when the first flicker of movement appeared - evidently, the trauma of transferring from mind to muscle the intention to move had caused loss of centre.  Some people were able to lift their foot and move it sideways a little, but lost centre before they had managed to take an actual step.  A few people were able to take a step, but lost centre as they tried to shift weight onto the extended leg.  A very few students managed to complete a whole step, or maybe even two steps.  Nobody was able to take three steps.

Kinthissa was born in Rangoon in 1952.  She studied Far Eastern art and philosophy at Vassar College, New York, and the School of Oriental and African Studies, University of London.  In London she encountered the TaijiQuan she had glimpsed as a child on her way to school.  She was apprenticed for 10 years to Gerda Geddes who, inspired in Shanghai in 1949 by the sight of an old man playing TaijiQuan along the Yangtze estuary, later studied with Master Choy HakPang and pioneered the teaching of TaijiQuan in England after her return in 1958.

From 1977 to 1995, Kinthissa taught Yang style 108 Form, mainly in London and Basel.  Between 1982 and 1989 she worked with students at the London Contemporary Dance School to find ways for them to regenerate energy and maintain awareness during strenuous training.  In China she studied Flying Crane Qigong, Sword Form, and the state-sponsored 48 Form.

Chen Style TaijiQuan is dramatic. Through being trained steadily in ZhanZhuang and Chansigong one comes to the practice of forms, such as LaoJia or XinJia, with an increasingly clear idea of the inner structure that makes the drama real and sustainable.

It is one thing to have a powerful experience after posture correction, and quite another to be able to move from A to B. Bombarded by qi blasts when we are adjusted in static stances, it is easy to forget that TaijiQuan is a technique of movement. It is a way of moving without losing centre. The adjustments that one receives from the teacher are for guiding one in learning how to move. A snapshot of the skilful taiji practicant taken at any moment should show a balanced and uncompromised frame. The initial challenge is to maintain the connections established in position A as one travels to position B, but the further aim is to transform position into continuity and thus to become free of position.

Chen XiaoWang's way of moving is both classical and free. The curious thing is that freedom may be found through hundreds of 'reps', rounds of practice of the same form, over years, with a calm heart and a detached mind. One must practise in humility for a very long time. The loneliness and solitude of solo practice give one resilience; facing one's difficulties makes one humble. It can be called a body training, but without the heart's perseverance and the mind's guiding light, it will not become art.

The book is unusual in the depth of detail in which it describes the practice of TaijiQuan.  It evokes an internal world of visceral experience, and the way words and mind-pictures may resonate within the body.

The four positions of double hand Chansigong are found gradually over some years of practice. When one can guide the qi into place at the side of the waist; when one knows its arrival at dantian and how it spirals up the back; when one is able to conduct its passage through the shoulder and along the arm until qi fills the fingers; when one can adjust oneself at any given moment to nudge the flow along these routes - then one may become free from the positions of Chansigong. The inner flowing, linking, and passing through the four stations interiorly is the true enactment of the taiji. The way, marked on a map, takes on life. 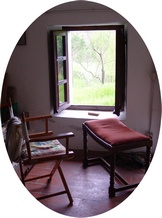